The Aims of this Toolkit are to Outline:

• The legal status of sex work in the UK

​This toolkit draws on existing academic research, practical knowledge of service provision for sex workers, as well as the lived experiences of sex workers. The toolkit has been contributed to by a range of individuals with experience of student sex work, as well as practitioners who have supported them. Research consulted for this project includes the Student Sex Work Brief (2018), which was produced by NUS LGBT+ campaign in conjunction with the English Collective of Prostitutes and the Sex Worker Advocacy Resistance Movement; Beyond the Gaze (2017), which is the largest online research project ever conducted within the UK, and The Student Sex Work Project (2015) which despite its limitations provides us with a baseline of knowledge as it was the first research project of its kind conducted in the UK.

In addition to academic research, the lived experiences of sex workers have been invaluable to the creation of this toolkit. We recognize the importance of highlighting the voices of sex workers, who have previously been denied access to the processes of knowledge production regarding their own work and lives. As well as the testimonies of sex workers themselves, the practical knowledge of people involved with service provision for sex workers has also been used to create this toolkit. Examples of these groups include National Ugly Mugs, the Sex Worker Advocacy and Resistance Movement, the English Collective of Prostitutes and Umbrella Lane.

What is Sex Work?

​Sex work is the exchange of sexual services, both involving direct physical contact and indirect sexual stimulation, for money or goods. Sex work is an umbrella term which includes web cam performers, actors and actresses in pornography, dancers in strip clubs, escorts, sugar babies, dominatrixes, phone-sex operators, as well as those selling sex indoor and outside premises.

In the UK, the number of students engaged in sex work is most likely to be increasing owing to the rising cost of tuition feeds and associated living expenses. According to The Student Sex Work Project, 5% of students have worked in the sex industry and 20% have considered it.
​

Who Are Student Sex Workers?

​Research conducted in 2018 by the NUS LGBT+ Campaign in conjunction with the English Collective of Prostitutes and Sex Worker Advocacy and Resistance Movement, highlighted that a large proportion of student sex workers were from marginalised backgrounds or vulnerable. 71% identified as women and 17 % as non-binary. Over 70% identified as Lesbian, Gay, Bisexual or Queer with over half describing themselves as having a disability; 14% were international students.2 These figures were corroborated by the largest online research project conducted within the UK, Beyond the Gaze (2017).
​

Why Do Students Enter the Sex Industry?

Student sex workers are motivated by the possibility of funding their studies with flexible working hours, as well avoiding dept. Some are also driven by the “anticipated pleasure” they think the industry can bring.
​

‘Morality clauses’ in tenancy agreements mean that sex workers can face eviction. This can lead to not getting a deposit back, inability to get references, and homelessness. If a student is evicted from their halls, it can be put on their accommodation record, which can prevent them from having accommodation in the future and can even be accessed by different departments at the university. In the worst case, student sex workers can be permanently expelled. This has far reaching ramifications for a student’s ability to get an education.
​

There are four different legal models pertaining to sex work.
​

• Soliciting. Selling sex or attempting to sell sex on a street or public place

• Kerb-Crawling with the intention of buying sexual services
​
• Brothel Keeping. It is an offence to incite ‘prostitution’ or control it for personal gain by ‘managing a brothel’. Crucially, this also relates to sex workers sharing a premise for safety, which can incur a 7-year custodial sentence
​
The table below illustrates the main professions that exist within the sex industry, and whether they are legal or not within the UK. 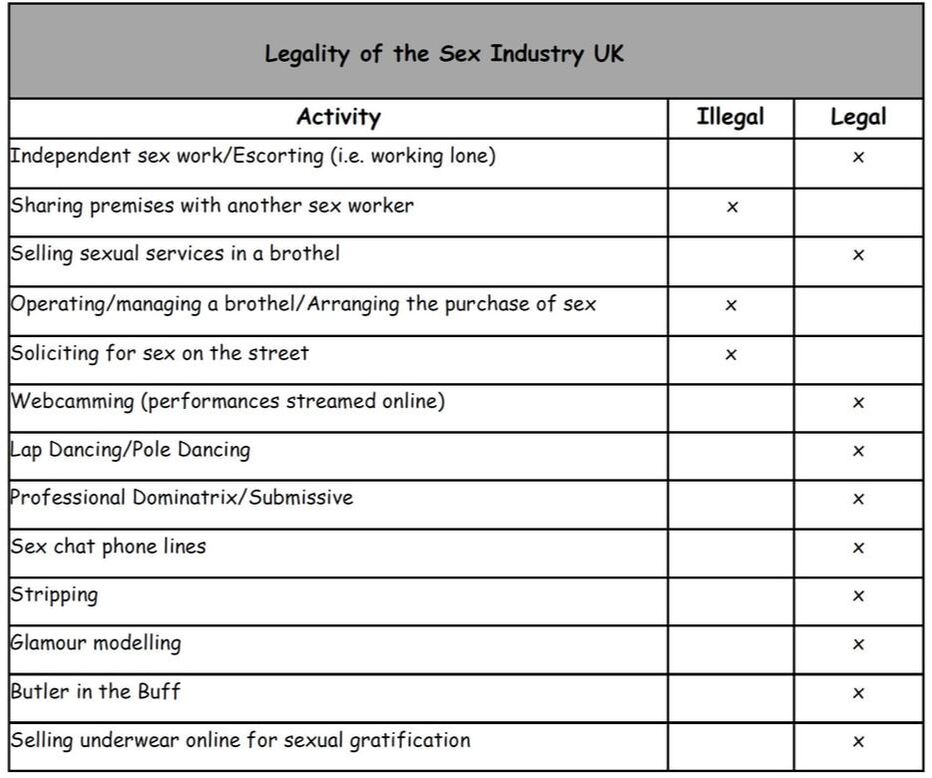 ​A recent survey detailing experiences of student sex workers reported that less than 15% of respondents thought their institutions or students’ union were providing sufficient and appropriate support. Outlined below is some practical guidance for academic staff on how best to support student sex workers.
​

​• Treat all students with respect. Disclosures and discussions regarding sex work will only happen if there is a trusting relationship.

• Let students speak about their experiences and needs at their own pace.

• Do ask appropriate and relevant questions but do not probe unnecessarily about their work.

• Ensure the student is safe within their work. Is it possible to offer guidance in the form of strategies they can employ?

• Expect their involvement in sex work to be hidden due to the risk of stigma and judgement.

• Gain consent from any individual before sharing information unless serious safeguarding issues are present.

• Offer practical solution-oriented guidance. For example, students may want advice on how to balance their professional work and studies.

• Ensure you are aware of relevant referral services.

• Break the confidence of students regarding sex work involvement.

• Write information about specific student sex workers in files, discuss their occupations in broader student related staff meetings, raise this in front of other people.

• Inform the police unless the student has specifically asked for help doing this.

• Make assumptions regarding involvement or motivations. Each person should be treated as an individual with varying needs.

• Ask details about their sex work unless the student has asked for specific help regarding this.

• Listen to myths regarding sex work. Staff should seek-out factual and reliable information.

• Discipline someone for being a sex worker. This includes course suspension and expulsion.

• Make assumptions about drug involvement, or the student’s personal life.

• Assume the student wants to leave sex work
​
• Patronise students when discussing their involvement in the industry.

​Appropriate, non-judgemental services are crucial for providing support when student sex workers need it. This will help to ensure the physical safety and emotional well-being of students involved in this industry.

​ Below are the main national and regional support services for sex workers across the UK.
Key Services

SWARM (Sex Worker Advocacy and Resistance Movement)
A collective founded and led by sex workers who campaign for the rights and safety of all who sell sexual services.

SCOT-PEP
A sex worker-led charity that advocates for the safety, rights and health of everyone who sells sex in Scotland.

ECP (English Collective of Prostitutes)
An organisation of sex workers working on the street and in premises with a national network throughout the UK.

SAAFE (Support and advice for Escorts)
A collective of independent escorts offering advice and support to all adult industry performers.

A Way Out
Outreach & Prevention Charity offering services to women work on the street, families and young people.

Arch North East
Rape crisis service that offer a specialist service to support people involved in the sex industry who have experienced rape or sexual assault.

Basis Yorkshire
Charity who supports indoor and street sex workers who identify as women, and young people who are sexually exploited.

The Men’s Room
Offer outreach & support to marginalised young men engaged in sex work or at risk of exploitation.

Red Umbrella Project
A service to combat instances of violence and crimes committed against anyone in the sex industry.

The Annex
Project within Loughborough supporting sex workers with drop-ins and basic needs.

Leicester Student’s Union
Offering support to all student’s including those who sell sexual services.

SAFE
A sexual health service for people who work, have worked or may start working in the commercial sex industry across Birmingham and Solihull.

Open Doors
A free and confidential advice service in East London for people working within the sex industry.

Clinic S
All East Sexual Health, Advice and Support - a free and confidential service to women, men, trans* and gender non-binary individuals, working in the sex or adult entertainment industry.

Yada – The Esther Project
A discreet and confidential service for all self-identifying women who sell or exchange sex in the coastal West Sussex area. ​